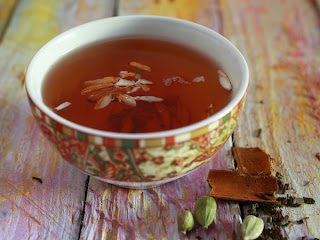 For Kashmiris scattered all over the globe, it carries the nip of a lost homeland. But for others like me who come across the real taste of it occasionally, this fragrant tea is a seed of solace.
Kahwa, also called “mogil chay”, a vino-coloured tea topped with almond parings, has helped Kashmiris beat the winter chill. Though I have had it several times at my residence in Mumbai, far from my homeland, it lacked that typical aroma that might be left in the lanes of long-lost Kashmir when made in a not-so-typical way.

Kahwa is a traditional green tea consumed in Afganistan, northern Pakistan, some regions of Central Asia as well as Kashmir Valley. In Pakistan, it is made in the Khyber Pakhtunkhwa and Gilgit-Baltistan regions. It is a popular breakfast tea among Kashmiris and is generally accompanied with special Kashmiri bakery items. Kashmiri Pandit migrants living in the North Indian Plains have also contributed to the tea's popularity among non-Kashmiris in recent times.

Even though exact origins of kehwa are still unclear, most Kashmiris believe that the aromatic traditional drink kahwa dates back to times immemorial & has been a part of local consumption for ages. Certain sources also trace the origins of the drink to the Yarkand valley in Xinjiang Area (Areas of Kashmir & Xinjiang were part of the Kushan Empire during the 1st & 2nd century AD. It is likely that use of kehwa & its spread from one region to another was facilitated & popularized in these regions during the Kushan rule).

The tea is made by boiling green tea leaves with saffron strands, cinnamon bark and cardamom and occasionally Kashmiri roses to add a great aroma. Generally, it is served with sugar or honey and crushed nuts - usually almonds. Some varieties are made as a herbal infusion only, without the green tea leaves.

Traditionally, Kahwa is prepared in a brass kettle known as Samavar which consists of a "fire-container" running as a central cavity, in which live coals are placed keeping the tea perpetually hot. Around the fire-container there is a space for water to boil and the tea leaves and other ingredients are mixed with the water. Kahwa may also be made in normal pans and vessels, as modern day urban living may not always permit the use of elaborate samavars.

Kahwa is usually served to guests or as part of a celebration dinner, and Saffron is added for special visitors. It is often served in tiny, shallow cups – traditionally in ‘Khosas’. Sometimes milk is also added to kahwa, but this is generally given to the elderly or the sick.

Pour 3 cups of water in a vessel and bring to a boil.
Add cinnamon, cloves, cardamom and sugar.
Stir on low heat until sugar dissolves.
Simmer the water for 3 minutes, keeping the vessel covered.
Add the green tea leaves and immediately turn off the heat.
Let the tea sit in the water for a minute. (For a strong flavor you can leave the tea in water for 2-3 minutes)
Divide the almonds and saffron and place in the tea cups.
Pour the tea over the saffron and almond pieces.
Serve hot. (serves 2 – 3 cups)

HEALTH BENEFITS OF KAHWA
·          It is caffeine free.
·          It is a fat burner and digestive drink that improves concentration and fights stress.
·          This drink energizes and has a warming effect. It is particularly beneficial to drink Kahwa in the cold winter night.
·          It helps to relieve headache and maintain fluid level in the body.
·          Green tea is an excellent anti-oxidant.

Reema Kaul
Mumbai based Finance Professional working with one of the Asset Management Companies.I enjoy to be part of the ever growing Financial Industry. When I'm not occupied with my routine work,I like to Travel, Explore, Experience Life and its forms. Other than Photography and Reading, Writing has become my latest desire and I'm trying to explore myself as a creative writer.